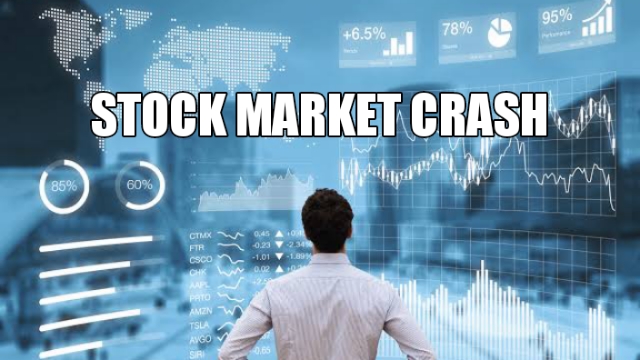 Benchmark stock indices fell on Monday as investors remain concerned about the rapid growth of Omicron cases. However, many other factors contributed to the today’s Stock Market Crash. Here’s all details you need to know.

Benchmark stock indices fell further after starting the day on a low note. This is one of the biggest stock market crashes in the recent months, resulting in a loss of nearly Rs 10 lakhs crore in the investor wealth.

Domestic stocks fell to their lowest level in nearly 4 months after Monday’s massive crash. The S and P BSE Sensex plunged more than 1,700 points or more than 3% around 1:10 p.m., while the Nifty fell more than 535 points.

It can be seen that there has been a sharp increase in volatility with the Indian VIX increasing by as much as 18%.

The threat of the rapid spread of the Omicron variant of the coronavirus is the main element behind today’s stock market crash.

It is spreading like wildfire throughout the European countries after becoming the dominant strain in South Africa.

The rapid spread of the virus has once again threatened the global economic recovery, leading to weak stock markets around the world.

Several countries are planning to reintroduce restrictions to limit the spread of the new Omicron variant, while some countries like the Netherlands have already dropped a new lockdown.

Experts believe that the Omocron variant has seriously interrupted the market momentum, resulting in a correction of most stock markets, including India.

One of the reasons the new variant has scared investors is the fact that vaccines may be less effective against the highly mutated variant of Covid19.

Less than a month after its discovery, Omicron has become a dominant strain in many countries.

India is also seeing a sudden increase in Omicron cases, with more than 150 cases already.

“The Omicron variant is also worrying the markets because it has higher transmission than the other variants,” Saurabh Jain, deputy vice president of SMC Securities in New Delhi, told Reuters news agency.

“The fall is also the result of continued sales by foreign institutional investors. The rollback in liquidity by central bankers will have some kind of repercussion.”

Heavy Selling’s By The FIIS

Another reason that contributed to today’s crash is the massive sale by foreign institutional investors. The FII’s have continuously sold their assets.

Nervousness among FII’s is not only the result of the new Omicron threat, but also aggressive central bank policies and rising global inflation. FIIs are also pulling out of the market due to increasing volatility following a possible global economic slowdown.

Not just in domestic markets, but the impact of Omicron’s deployment in global markets has been equally devastating.
stock markets in China, the United States, Europe and other parts of the world have also fallen as the new variant of the coronavirus spreads rapidly around the world.

All 3 major U.S. stock indices finished in negative territory for the week after the U.S. Federal Reserve announced there would be at least 3 interest rate hikes in 2022 due to the high inflation.

Equity markets in Asia and other parts of the world could see a correction due to the aggressive stance taken by central banks in developed countries to fight rising inflation. Global inflation has risen rapidly in recent months, prompting central banks to tighten the policies.

The US Federal Reserve’s plan to raise interest rates from 2022 had an almost immediate response, as many other central banks raised rates to fight the inflation.

Keep visiting us for stay updated to news like Stock Market Crash!