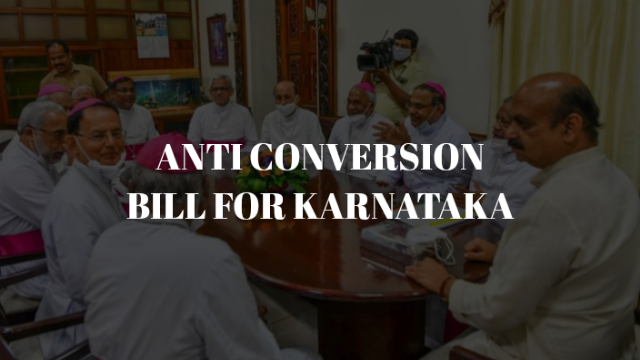 The winter session of the Karnataka assembly has started on Monday (14 December 2021), but the Anti Conversion Bill For Karnataka has not tabled yet, it may be tabled upcoming day, that bill that Karnataka Government is going to instruction in the winter may have a penal provisions and also have insist the person who wish to change his/her religion have to give an application before the Deputy Commissioner before two months.

It may also happen that the person who wishes to change their religious faith has to give up all the reservation benefits of that past believing religion, but he will get the reservation benefits per his new religious faith. On Sunday (12 December 2021) it was also stated by Karnataka’s Chief Minister that the bill that is going to be introduced in assembly is not aimed to target any specific community.

He has also stated that we are going to table the Anti Conversion Bill with proper framework of law, of course there is article 25 in the constitution which says that no forced conversions can be done, but there is penal provision.

Karnataka Government has said there will be a penalty provision for the forced conversions, whoever will try to convert one’s religious faith forcely with will be punished under the law.

On Monday (13 December 201) Karnataka Chief Minister “Basavaraj Bommai” has stated that the Anti Conversion Bill is now before the law department scrutiny committee, it will be introduced in legislative assembly and council after getting cleared.

Bharatiya Janata Party led government of Karnataka is to push the Anti Conversion Bill, but the opposition party such as minority communities has opposed the Bill.

D.K. Shiva Kumar who is the chief of Karnataka Pradesh Congress committee has been saying that “The Bill is anti-Minority”.

D.K Shiva Kumar has said to a reporter that there is already a law for those who try to convert one’s religion forcely, then why is the new law needed?

What is an Anti Conversion Bill?

An anti Conversion bill a bill or draft will be can be introduced by Government Of Karnataka in the ongoing Winner session of Karnataka Legislative Assembly, it is a bill against the forced conversions of religion, when the bill will introduced in legislative assembly and debate will done on it, some MLAs can oppose and some can push to be a law.

If the Anti Conversion Bill For Karnataka passes then it will come into effect as law, after being the law, culprits will be punished for the forced conversions.

As I mentioned, the law has another side too, whoever wishes to change his/her religious belief has to give an application to the Deputy Commissioner before two months.

We hope that after reading this article you have gotten the in-depth and detailed information about the Anti Conversion Bill For Karnataka. Even after reading this article, if you have any questions or queries related to the Anti Conversion Bill For Karnataka then ask it by commenting below, we will try to answer all your questions and queries as soon as possible.